On September 15, 2000, the cornerstone of the plant was placed, with the presence of the Most Honorable President of the Generalitat de Catalunya and the members of the board of directors of BASF SE, President of SONATRACH and the President of the Regional Division of BASF Southern Europe.

The first drop of propylene in Tarragona was produced on January 27, 2003.

March 16 2004 marked the inauguration of the PDH plant with the presence of His Majesty King Don Juan Carlos I of Spain, Most Honorable President of the Generalitat de Catalunya and leading personalities from the government of Algeria, Germany and Spain, in addition to an extensive representation of local and regional authorities.

To date, the plant has produced more than 2,000,000 (two million) tons of propylene in its nearly 10 years of operation.

This production has been supplied almost entirely to BASELL Polyolefins Iberica S.L. at its plants in Tarragona, where it has been transformed into polypropylene.

On January 20, 2000, BASF SONATRACH PropanChem S.A. was established, with the corporate head office located in Tarragona. The share participation of BASF AG is 51 %, while SONATRACH has a 49 % holding. The shareholders are BASF Española and SPIC (Sonatrach Petroleum Investment Corporation). The plant facility has a production capacity of 350,000 tons of propylene. The propane required for the production of propylene is imported from Algeria. Propylene, a basic raw material for the production of polypropylene, is delivered to BASELL Poliolefinas Iberica S.L. for the supply of its plants.

The afore mentioned projects were completed with the construction of a combined cycle power plant with a capacity of 400 megawatts that ensures the long-term supply of electricity and steam. Furthermore, for the necessary supply of propane, a propane tank was built in the port of Tarragona.

BASF SONATRACH PropanChem S.A, is a joint-venture between BASF and SONATRACH, established with the aim of producing propylene. On November 6, 1999, in Algiers, BASF SE and the Algerian State Oil and Gas Company - SONATRACH signed a contract establishing a joint venture to implement the construction and operational works of a propane dehydrogenation unit (plant PDH) with the purpose of producing propylene. 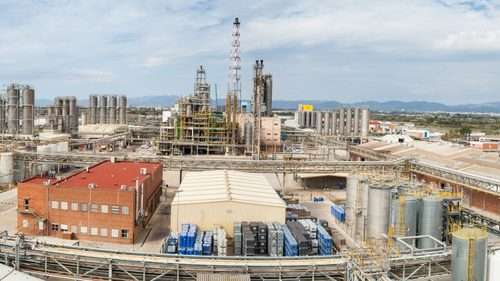