Krefeld-Uerdingen - LANXESS AG is to build a new facility for formalin production at its site in Krefeld-Uerdingen. The specialty chemicals group will then no longer be dependent on buying in the feedstock, which it needs for the production of trimethylolpropane (TMP). TMP is a trivalent alcohol that is used among other applications for numerous products in the furniture, construction and automotive industries.


The total investment for the new building and the process optimization will be in the order of EUR 18 million. As a result, LANXESS will create five additional jobs at its Krefeld-Uerdingen site. Construction of the new plant is expected to begin in the third quarter of this year, with commissioning earmarked for the end of 2011. In addition to the production facility, new formalin and methanol tanks will also be installed across an area measuring around 1,000 square meters.


Clear "thumbs-up" for Germany as an industrial location


"With our own formalin plant, we will be able to further expand our strong global position as a manufacturer and supplier of trimethylolpropane," says Werner Breuers, member of the Board of Management of LANXESS AG. "The elimination of transport costs combined with various synergy effects with regard to energy efficiency will give us significant cost benefits.”


Rainier van Roessel, member of the Board of Management and Labor Relations Director of LANXESS AG, adds: “This investment by the Basic Chemicals business unit sends out another important signal in favor of Germany as a location for industrial production, and is a clear thumbs-up for our site in Krefeld-Uerdingen."


The business unit had announced last year that it would complete the expansion of the production facilities for the key basic chemicals cresols, Vulkanox BHT, Vulkanox BKF and monochlorobenzene at the Leverkusen site in the first quarter of 2010. The project, costing around EUR 35 million, will raise capacities by up to 60 percent.


LANXESS will continue to back the German production facilities, according to van Roessel. "Well-trained, experienced employees, an excellent infrastructure and direct access to technical and scientific innovation are very important competitive advantages and a definite benefit for the Uerdingen site.” Only two weeks ago, following the official groundbreaking ceremony, LANXESS began construction of a new plant for membrane technology in Bitterfeld in the eastern part of Germany. It will cost EUR 30 million. The specialty chemicals company plans to invest some EUR 150 million at its German sites this year.


The Basic Chemicals business unit belongs to the Advanced Intermediates segment, which achieved sales in the first nine months of 2009 of EUR 827 million. It operates production sites in Dormagen, Krefeld-Uerdingen, Brunsbüttel and Leverkusen in Germany, Liyang in China, Nagda in India, and Baytown (Texas) in the United States.  Of the business unit's global workforce of over 1,400, around 1,000 are employed in Germany. 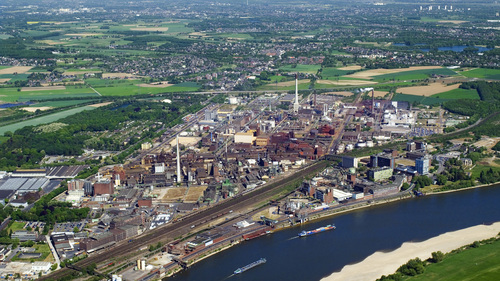