Arnhem, the Netherlands – When Akzo Nobel officially opens its two new chemicals plants in Delfzijl today it will mark the completion of the company’s biggest ever chemicals investment in the Netherlands.

construction of the chlorine and monochloroacetic acid (MCA) facilities—which involved the relocation of activities from Hengelo—saw the company commit a total of approximately EUR 200 million to the project, an outlay which has also signaled the end of Akzo Nobel’s regular Dutch chlorine transports.

Supported by a EUR 65 million contribution from the Dutch government which was approved by the European Commission, today’s official opening at Delfzijl will be attended by a number of guests, including the Dutch State Secretary for the Environment, Pieter van Geel.

“This is a landmark occasion for Akzo Nobel given that structural chlorine transports by rail have now ended,” said CEO Hans Wijers ahead of the ceremonial event. “However, it would not have been possible without the full support of the authorities, with this project offering concrete proof of what can be achieved through a successful public/private partnership.”

Added Leif Darner, Akzo Nobel’s Board member responsible for Chemicals: “Investing in these new facilities emphasizes our strong commitment to supporting our refocused chemicals activities. The new Delfzijl MCA plant is one of the largest of its kind in the world and will benefit from having a key raw material—chlorine—supplied on-site by our second new factory, which uses state-of-the-art membrane cell technology and is the first of its kind in Europe.”

All the chlorine produced by the new facility will be carried downstream by pipeline to several users at the chemical park in Delfzijl. The largest user will be the new MCA plant. MCA is used as an intermediate in the manufacture of a number of products, including pharmaceuticals, cosmetics and agrochemicals, as well as having applications in the oil, mining and detergent industries. 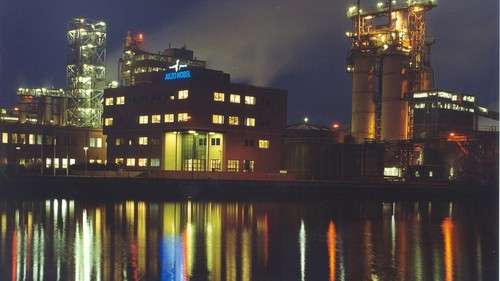