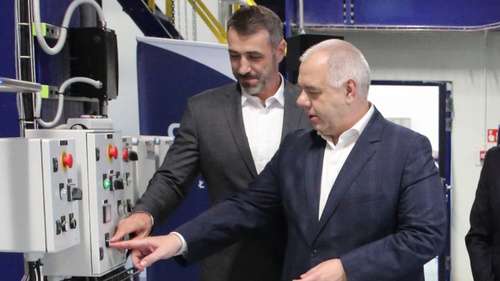 Grupa Azoty 'Puławy' started a mechanical and technological start-up of a granulated ammonium nitrate fertilizer plant. The production capacity of the two new lines totals 2,6 thousand. tons of fertilizer per day (up to 820 thousand tons per year). Granulated ammonium nitrate and nitrate will help meet the growing demand of large-scale agriculture. Jacek Sasin, Deputy Prime Minister and Minister of State took part in the ceremonial commissioning of the plant.

The budget of the completed investment was PLN 430 million (about 97 milion Euro). The production line of granulated ammonium nitrate (AN - 32% N) can produce 1200 tons per day, and the nitro chalk line (CAN - 27% N) - 1400 tons per day. In addition to the production facilities, the project included the construction of logistics and associated facilities for unloading and processing the raw material, as well as packaging and storage of finished products.

The use of fertilizers in the form of granules with a larger diameter, due to the larger spreading range that allows for wide spreading, improves efficiency, especially on farms with a large surface area. This type of product is preferred by foreign customers and, due to the ongoing process of land consolidation in Poland, a continuous increase in demand in our market is also expected.

- This is an important investment for Puławy and the entire Azoty Group. As a proven partner of Polish farmers, we have to respond to their needs. That is why we are constantly expanding our product range and improving the quality of our products. It should be emphasized that all our investments, including the plant that has just been launched, have been planned and carried out in view of their beneficial impact on the environment and climate - emphasizes Dr. Wojciech Wardacki, President of Grupa Azoty.

- The new fertilizers produced here, based on Polish technological solutions, will meet the highest standards, meet the restrictive EU safety requirements and meet the quality expectations of Polish and European farmers. In addition, the new production line not only increases the business potential of the company Puławy, but also of the entire Azoty Group - said Deputy Prime Minister Jacek Sasin.

- In 2016, on the 50th anniversary of the start of production in Zakłady Azotowe Puławy, the cornerstone was laid for a new granular ammonium nitrate-based fertilizer plant. It was a long road, on which we could count on your support, the support of political and government circles many times. On behalf of myself, the board of directors and especially the employees of Grupa Azoty Zakłady Azotowe PUŁAWY, I would like to thank you for this great support, thanks to which we have the honor of mechanically starting our plant today - said Tomasz Hryniewicz, chairman of the board of directors of Grupa Azoty PUŁAWY.

The use of the mechanical granulation process in the new plant allows the production of fertilizers with a much more diverse composition than in the tower granulation used so far. Production is also more environmentally friendly and safer, as is the transport of the fertilizers produced. After the modernisation and expansion of the nitric acid plant in 2021, Grupa Azoty Puławy will be the most modern nitrogen complex in Europe.

(translated from a Polish press release by Grupa Azoty)