Viru Keemia Grupp (VKG) opened the third oil shale processing plant that is based on Petroter technology. The grand opening of the plant took place with the participation of Kristen Michal, the minister of economic affairs and infrastructure of the Republic of Estonia.

Kristen Michal, the minister of economic affairs and infrastructure: „The new Petroter III oil shale plant is a step ahead in the direction of the modernization of the oil shale sector in Estonia. Using oil shale for the production of oil, we are going to increase the share of energy that is obtained from oil shale. The Estonian oil shale sector will be capable of being successful in the conditions of the European climatic and energy policy, reducing the environmental effect and boosting efficiency. The innovation implemented by the Estonian companies and engineers in the name of the new Petroter III plant will help to achieve this aim“.

Ahti Asmann, the Chairman of the Board of VKG: „We are very pleased and proud today to open the third Petroter plant. The successful implementation of the project, in spite of the difficult times in the oil shale sector, has been one of the main targets of the Group in the year 2015. It has been the largest investment into the private sector within recent years in Estonia. The plants that are based on Petroter technology have proved the efficiency of investments in practical terms and the appropriateness of the choices that VKG made some time ago. The energy efficiency of Petroter oil plant is over 75%, and, owing to some environmental measures, the ecological footprint of the Group, compared with the technologies that have been used earlier, will reduce by several times“.

The construction of Petroter III plant started in October 2013, and it was launched in September 2015. The background experience and the scheduled launching operations helped to bring the third plant to the full capacity within a week. Within a year, the plant processes ca 1 million tons of oil shale, out of which amount about 135,000 tons of oil products and, in addition, also the by-products – electricity and heat energy – is used for heating the nearby towns.

The value of the Petroter III project is 84 million EUR. In addition to that, the plants also play an important social and economic part both on regional and national levels. By launching the three plants, three hundred direct and about one hundred indirect workplaces were created in Ida-Virumaa.

VKG is one of the largest oil shale processing companies and the second largest oil shale manufacturer in the world. The annual contribution of the Group into the national GDP is about 1%. VKG provides employment to over 2,150 people in Virumaa. VKG is a responsible company, which owns a mine, seven oil shale processing plants, including Petroter I, II and III plants, two power plants, and electricity and heat distribution stations. 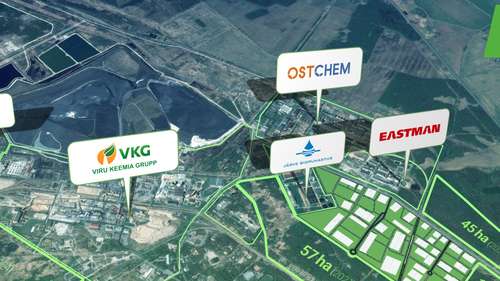