Elixir Group is developing the integrated Industrial ChemPark Prahovo (ICPP) on the Danube according to the model of German chemical parks.

Since the start of the economic reforms, Serbia has developed into one of the most important investment locations in Central and Eastern Europe. Agriculture and food production have a long tradition in Serbia, but now it is mainly sectors such as the automotive or electronics industry, mechanical engineering or the chemical and pharmaceutical industries that attract investors.

The Balkan republic itself has great natural resources and more than 5.7 million hectares of agricultural land, of which more than 2 million hectares are highly productive. Therefore, the establishment of the Elixir Group in 1990 was a step towards the realisation of efficient and profitable agriculture in Serbia. Today, the Elixir Group is one of the leading fertiliser producers in the Balkans. With more than 1,600 employees and an annual turnover (2020) of about 300 million euros, the Elixir Group has two own factories and a production of 600,000 tons of mineral fertilizers per year and 180,000 tons of phosphoric acid per year.

At Industrial ChemPark Prahovo Elixir produces mineral fertilisers and phosphoric acid. Sulphuric acid is transported by rail from the ZiJin Bor copper smelter, currently 400,000 tonnes/year, with an additional 400,000 tonnes from 2023. Other raw materials such as potassium chloride or phosphate concentrate are imported via the company's own port facility.

The industrial park has a 110-KV transformer station with two capacities of 31.5 MW, of which Elixir itself currently uses only 10 MW.

At around EUR 0.07/kWh, the location offers new investors the lowest price for CO2-neutral electricity, as Europe's largest hydroelectric power station is located in the immediate vicinity.

To the east, Industrial ChemPark Prahovo is connected via the Danube to the Black Sea and the port of Constanta, an important international hub for maritime traffic. To the west, the site is connected to all countries in the Danube basin and, via the Rhine-Main-Danube Canal, to Rotterdam and the North Sea. The entire existing complex is connected by a well-developed railway infrastructure to the Serbian railway network and to the international railway network, as well as to the two road and railway hubs of Vidin in Bulgaria and Calafat in Romania and to other European countries by road.

Elixir is investing in the expansion of Industrial ChemPark Prahovo, which covers a total area of 600 hectares, of which 300 hectares are earmarked for the development of the industrial and chemical park. An important part of the investment plans is the future energy supply of the site. An incinerator for solid, pasty and liquid industrial and hazardous waste - the first of its kind in the Balkans - will provide 35 tonnes of process steam per hour with a thermal energy output of 30 MW. The plant's energy output will contribute to greater energy efficiency with a view to long-term sustainable and competitive production security.

The company Elixir has created the first concept for the development of green hydrogen in Prahovo. This is possible thanks to the direct connection with the neighbouring Djerdap II hydroelectric power plant. The electricity from this plant can be used for the production of hydrogen through the use of electrolyzers. The green hydrogen can be made available on ICPP or on local and surrounding markets all the way to Europe.

"The European chemical industry is developing more and more in the direction of specialty chemicals. We hope that our site can be of interest to foreign chemical producers because of its green, circular character, economical energy facilities, available services and spacious premises.," explains Matthias Predojevic, Vice President Corporate Development and Managing Director of the company responsible for developing the site into Industrial ChemPark Prahovo.

The Industrial ChemPark Prahovo enables newcomers to start production quickly, while the infrastructure required for production is organised by the park operator. In this way, companies can reduce both their initial investment and the time it takes to bring their products to market.

Foreign companies are major employers in Serbia. For example, more than 400 German manufacturing companies, such as Henkel, Stada, Continental, Bosch, Siemens, Dräxlmaier, Leoni and ZF, have established themselves in Serbia, employing more than 60,000 people. 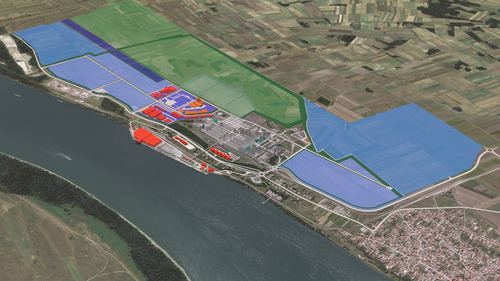