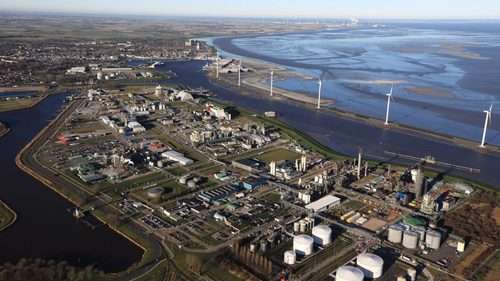 Groningen/The Hague, The Netherlands  – A consortium of Gasunie, Groningen Seaports and Shell Nederland announces today that they intend to launch the NortH2 project: the production of green hydrogen using renewable electricity generated by a mega offshore wind farm, 3 to 4 gigawatts in 2030, contributing to the objectives of the Dutch Climate Accord. Additionally, it has the ambition to grow to about 10 gigawatts around 2040. Green hydrogen production, initially in the Eemshaven and later possibly also offshore, is expected to be around 800,000 tonnes per year by 2040. This would avoid about seven megatonnes of CO2 per year. NortH2 has the support of the province of Groningen and is looking for partners to expand the consortium and realise this project.

Green hydrogen, produced with renewable sources such as wind and solar energy, is central to the Dutch Climate Accord and the European ‘Green Deal’. At present, industry is already using large quantities of hydrogen, but this mainly produced from natural gas. Replacement with green hydrogen contributes significantly to the decarbonisation of the industry.

First of all, NortH2 envisages the construction of very significant wind farms in the North Sea, which can gradually grow to a capacity of about 10 gigawatts. This would be sufficient to meet the current electricity consumption of some 12.5 million Dutch households. Many wind turbines will need to be installed to enable this. The first ones could be ready in 2027 and will be used for green hydrogen production.

In addition, the plan provides for a large electrolyser in the Eemshaven, where wind energy is converted into green hydrogen. The consortium is also considering the possibilty of placing electrolysers offshore.
Finally, a smart transport network in the Netherlands and Northwest Europe is required to deliver the 800,000 tonnes of green hydrogen to mainly industry, and later possibly also to consumers. This could save an estimated seven megatonnes of CO2 emissions per year around 2040. In this project, Gasunie’s natural gas infrastructure – which is now mainly used for natural gas and green gas – is also used for the storage and transport of hydrogen.

Marjan van Loon, President-Director of Shell Nederland: “Together, we are launching an ambition that puts the Netherlands at the forefront of hydrogen globally. In addition, it contributes to achieving the objectives of the Dutch Climate Agreement and accelerates the energy transition. This project offers opportunities throughout the entire hydrogen chain. In addition, it fits well with our New Energies aspirations and our ambitions to find new ways to reduce CO2 emisions and deliver more and cleaner energy, at home, on the go and at work. In order to realise this project, we will need several new partners. Together we will have to pioneer and innovate to bring together all the available knowledge and skills that are required. The energy transition calls for guts, boldness, and action.”

The project is expected to start this year with the kick-off of a feasibility study. If the outcome is successful, the consortium hopes to produce the first hydrogen by 2027. This depends, among other things, on permits from governments, the assignment of new wind farm locations in the North Sea, the available locations for the hydrogen facility/facilities and the final investment decisions of the parties concerned. The realisation therefore partly depends on the contributions of various industrial and energy partners. NortH2’s partners anticipate that the initial project phases may potentially require European and national subsidies available for the decarbonisation of energy.

Han Fennema, CEO Gasunie: “The Netherlands has a leading position in the shift to a hydrogen economy. We have the North Sea for the production of wind, the ports as logistical hubs, and the industrial clusters that want to make the switch to green molecules and a suitable transport network. This comes together perfectly in the northern Netherlands at the Groningen Seaports where the conversion to hydrogen takes place, with storage in Zuidwending and an ambitious province. If we want to realise our climate ambitions, we must have large-scale infrastructure in good time. With these partners, and hopefully even more partners soon, we are helping the market to accelerate the transition to renewable energy.”

Because there are fluctuations in solar and wind energy, it is important to convert them into other energy carriers, such as hydrogen. Using the latest technologies, hydrogen is relatively easy and safe to produce, and can be stored easily, unlike electricity.

Cas König, CEO of Groningen Seaports, adds: “We are already actively building the green industry of the future in the north of the Netherlands. An important part of industry in Delfzijl is already using hydrogen and the construction of Europe’s largest green hydrogen facility in our port city is imminent. Because of this, industry can decarbonise significantly and has the ability to continue growth, as a result of which our position is strengthened even further. Green industry in the North also makes a concrete contribution to the climate targets of the Netherlands for 2030. Our target is to become Europe’s largest green hydrogen chain with the northern Netherlands at the centre.”

This announcement is the start of the further development of the multi-partner project to form a broad coalition necessary for making a success of this large-scale project. It is also the beginning of the feasibility study as well as discussions with the relevant European, national, regional and local authorities on the regulatory and policy frameworks, enabling stable and positive investment decisions.

AGC to Expand its Spanish Synthetic Pharmaceutical Production Base

Borealis producing certified renewable polypropylene at own facilities in Belgium

EverMinds™ in practice: Another milestone reached in Borealis’ efforts to advance the circular economy. Kallo and Beringen production sites receive ISCC Plus certification. Collaboration with upstr...