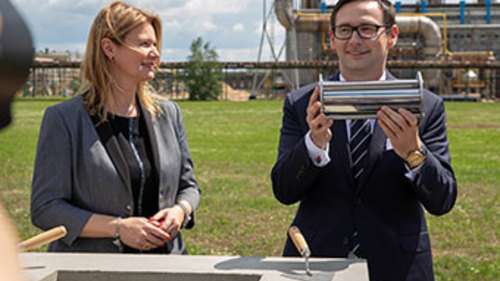 ANWIL, a member of the ORLEN Group, has commenced the construction of two out of three facilities for the production of nitrogen fertilizers. The project, the total value of which is approx. PLN 1.3 billion, will allow ANWIL to increase its production capacity in mid-2022 by approx. 50 per cent The project is implemented in response to the demand from Polish farmers for high quality products. It is also a significant step towards reducing the imports of fertilizers.

“Strengthening the competitive position of ANWIL is one of our priorities. Developing the competences of the Włocławek-based company in terms of nitrogen fertilizers produces measurable benefits not only for the entire ORLEN Group, but also for the region and for Polish farmers. By expanding the offer of high quality products, we will contribute to ensuring Poland’s food security,” Daniel Obajtek, President of the Management Board of PKN ORLEN S.A., said.

ANWIL is the largest Polish manufacturer of fertilizers that has a true potential for increasing its production output. The company’s current production capacity in terms of fertilizers means that it has an approx. 35 per cent surplus of ammonia, the natural buyers of which are manufacturers of fertilizers. Thanks to implementing the planned project, ANWIL will be able to utilize this volume and place on the market a ready, high quality product in the form of nitrogen fertilizers, without losing the margin.

This is the first of the three most important contracts to be concluded within the framework of the project, which is of strategic importance for the development of the Włocławek-based company. The other two will concern the construction of a granulation facility and auxiliary facilities.

“ANWIL is an integral element of the ORLEN Group, which takes care of the development of each of the regions in which it operates. This has a positive effect on the situation of the local community. Today, employing over 1,300 people, we already are one of the major employers in the Kujawy and Pomorze regions. When the fertilizers project is completed, 100 new jobs will be created,” Agniesza Żyro, President of the Management Board of ANWIL S.A., emphasizes.