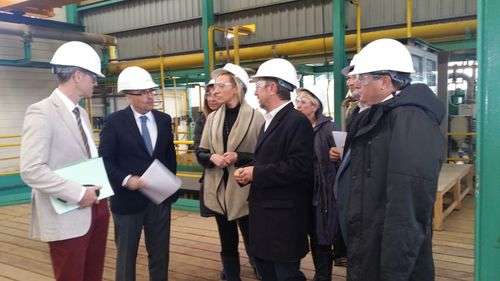 Sabiñánigo - In the framework of the visit of the regional minister of Economy, Industry and Employment of the Government of Aragon, Marta Gaston, to the factory in Sabiñánigo, Ercros has announced the investment plan of this center which provides activities for a total amount of 28 million euros for the period 2016-2020.

The main project that includes this plan is the construction of a plant to produce chlorine and caustic soda by membrane electrolysis technology that is considered BAT (best available technology). This new plant will have 15,000 tons annual production capacity of soda, which will supply most of the need of soda consumption at the TCCA plant located at the same facility and avoid, to the same extent, the transport of this product to Sabiñánigo.

Along with soda, the new plant will obtain 14,000 additional annual tons of chlorine. A portion of said chlorine will be used to manufacture hydrochloric acid and the rest will supply the TCCA plant once it expands. Coproduced hydrogen manufacture will allow 2,100 additional tons of high purity ammonia.

The second major project is the planned capacity expansion at the TCCA plant, which is now at 100% of its capacity, from 22,000 t/year to 28,000 t/year. This will be the second expansion of this plant, after it increased its capacity in 2013, from 16,000 t/year to the current capacity. The TCCA is a derivative of chlorine used in the disinfection of swimming pool water, a market in which Ercros is the fourth largest manufacturer in the world and the first in Europe.

In the past 10 years, investments have been made in Sabiñánigo factory amounting to 30 million euros. In addition to expanding the plant of TCCA above mentioned, it has been carried out the conversion to the membrane technology at chlorine-potash electrolysis plant and the increase of the production capacity of sodium chlorite, among other projects.

204 people work at Ercros factory in Sabiñánigo, with activity is focused on the production of chlorine and its derivatives (TCCA and sodium hypochlorite), potassium hydroxide and potassium carbonate, sodium chlorate and sodium chlorite, ammonia and hydrogen peroxide. The factory also has an R+D+i department responsible for numerous technical advances in the treatment of swimming pool water, such as boric acid free TCCA tablets and micro-encapsulation of additives in TCCA tablets.

Approval for a new Ercros factory in Sabiñánigo,as requested for the expansion of its chlorine production capacity with membrane technology from 15,000 t/year to 45,000 t/year. This will involve an...