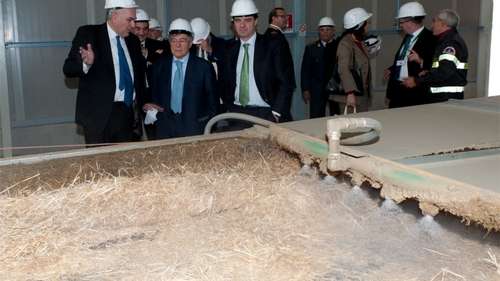 Beta Renewables, a global leader in cellulosic biofuels and part of the Mossi Ghisolfi Group, and Novozymes, the world’s largest producer of industrial enzymes, today marked the official opening in Northern Italy of the world’s largest advanced biofuels facility. Situated in fields outside the city of Crescentino, it is the first plant in the world to be designed and built to produce bioethanol from agricultural residues and energy crops at commercial scale using enzymatic conversion. (second-generation cellulosic bioethanol)

“The advanced biofuels market presents transformational economic, environmental and social opportunities, and with the opening, we pave the way for a green revolution in the chemical sector,” says Beta Renewables’ Chairman and CEO, Guido Ghisolfi. “We will continue to commercially expand Beta Renewables’ core technology throughout the world, and we are very confident at this stage given the demand we see around the globe.”

“The opening today presents a leap forward and is truly the beginning of a new era for advanced biofuels,” says Peder Holk Nielsen, CEO of Novozymes. “Here, at this plant, enabled by Novozymes’ enzymatic technology, we will turn agricultural waste into millions of liters of low-emission green fuel, proving that cellulosic ethanol is no longer a distant dream. It is here, it is happening, and it is ready for large-scale commercialization.”

The plant uses wheat straw, rice straw and arundo donax, a high-yielding energy crop grown on marginal land. Lignin, a polymer extracted from biomass during the ethanol production process, is used at an attached power plant, which generates enough power to meet the facility’s energy needs, with any excess green electricity sold to the local grid. At the inauguration, Guido Ghisolfi and Peder Holk Nielsen were joined on the ground for the celebrations by Italy’s Minister for Economic Development, Flavio Zanonato, and representatives from the European Commission, as well as more than 500 global stakeholders.

With the technology ready at commercial scale, it will be vital to create stable and conducive policy conditions worldwide, to harvest better the vast opportunities in cellulosic ethanol and advanced biofuels.

A recent study by Bloomberg New Energy Finance concludes that transforming agricultural residues into advanced biofuels could create millions of jobs worldwide, economic growth, reduction of greenhouse gas emissions, and energy security by 2030. Government support is, however, vital to accelerate the deployment of next-generation biorefineries.

Beta Renewables’ PROESA™ engineering and production technology alongside Novozymes’ Cellic® enzymes represent the most cost-competitive advanced biofuels platform in existence today. More than $200 million has been invested in research and development of the technology used to produce cellulosic ethanol at the Crescentino facility, since 2011.

“Investors interested in cellulosic ethanol often ask when the technology will be ready at commercial scale,” says Guido Ghisolfi. “PROESA enables customers to produce advanced biofuel at a cost-competitive price relative to conventional biofuels – at large-scale and today. Our complete offering makes cellulosic biofuel projects bankable and replicable. With the world’s first commercial plant up and running here in northern Italy, I very much look forward to an exciting journey of establishing an entirely new, and very promising, industry.”

About TPG and TPG Biotech